Bees and Wasps are beneficial insects, although they are generally considered to be pests because of their ability to sting. Wasps, in particular, can become a problem in autumn when they may disrupt many outdoor activities. People often mistakenly call all stinging insects “bees”. While both social wasps and bees live in colonies ruled by queens and maintained by workers, they look and behave differently. It is important to distinguish between these insects because different methods may be necessary to control them if they become a nuisance. 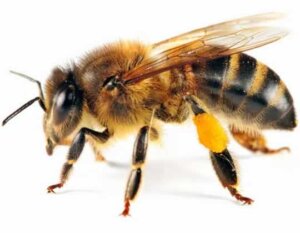 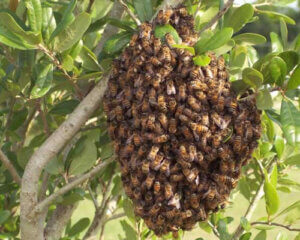 Bees are robust-bodied and very hairy compared with wasps. Their hind legs are flattened for collecting and transporting pollen. Bees are important pollinators. Honey bees are responsible for more than 80% of the pollination required by most fruits, legumes, and vegetable seed plants as well as many ornamentals that are grown in our landscapes.

Swarming is the natural method bees use to create new colonies. Each swarm contains several thousand worker bees, a queen, and several hundred drones. When the hive, especially the brood nest area, becomes crowded, the bees build swarm cells (new queen cells) and the old queen leaves with a swarm. The swarming bees cluster at a nearby site. They then seek out a new nest location to start a a new hive. 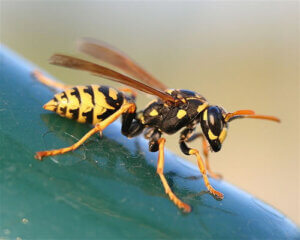 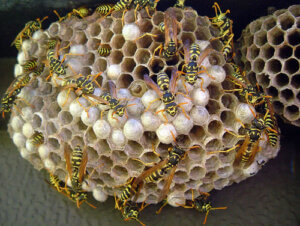 Paper Wasps are about 3/4″ to 1″ inch long with slender, narrow-waist bodies. Their wings are smoky black and they fold lengthwise when at rest. Body coloration varies between brown, red, and yellow. Paper wasps are semi-social insects, colonies consist of three castes: workers, queens and males.

In spring-time fertilized queens select a nesting site and begin to build a nest. Nests are built from wood fiber that is chewed and formed into a single paper-like comb. Nests are oriented downward and are suspended by a single filament. They are commonly found around the home underneath eaves.

Several species of social wasps known commonly by entomologists as Yellowjackets are the smallest at about 1/2 inch long. Most species typically build their nests underground, often in an abandoned mammal burrow or a similar underground cavity. However, the German yellowjacket commonly nests in structures, often found nesting in wall voids, attics or crawl spaces, and they use some available hole or crack in the exterior facing of the building as an entry point. 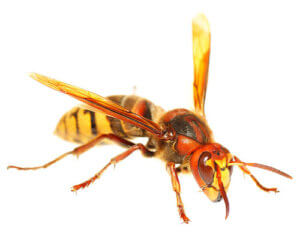 Baldfaced hornet nests are conspicuous and are sometimes near human structures. Many nests are discovered at the end of the summer, after protecting leaves fall from trees. It is often best to do nothing at this time except be aware of avoiding the nest and you could even mark out a caution zone so that others are not surprised. Occasionally, the wasps will build nests under roof overhangs, in attics, crawlspaces and wall voids, or under decks or porches. Foragers are present from June to October.

Bumble bees and wasps have annual colonies that last for only one year. The colony dies in the fall with only the queen surviving the winter.

Honey Bees are perennial insects with colonies surviving more than one year.

Wasp nests that are visible but are not near your home or areas of human activity do not need to be treated. If they are not disturbed, the wasps won’t bother you.

Nests that are near human activity can pose a potential problem. If there is a concern about stings, you should eradicate the nest.

Should you want to attempt controlling them yourself, please consider the following: